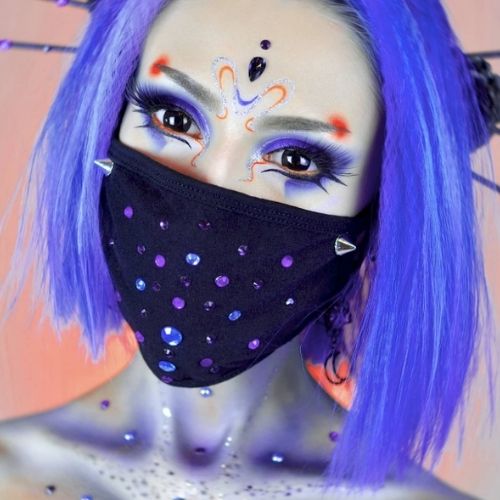 Anime super-fan? You will love our incredible range of more than 100 pixel-perfect non-prescription anime contact lenses. With a huge selection of Naruto contact lenses and Demon Slayer: Kimetsu no Yaiba contacts, we also have contacts to replicate the eyes of characters from popular Japanese anime including My Hero Academia, Attack on Titan, Tokyo Ghoul, and many others.

Often referred to as weebs and otakus, some estimates suggest there are now in excess of 90 million Anime fans globally. A significant number of these fans partake in cosplay, using costumes, SFX makeup, and even anime contacts to replicate the appearance of their favorite characters. Once considered a niche, and often incorrectly labeled a genre in its own right, anime actually consists of many genres including action, comedy, drama, supernatural, and romance. In the English language, the term itself refers to traditional hand-drawn and computer-generated animation and is, therefore, better described as a medium.

The medium’s characteristic art style that’s known and loved today emerged through the pioneering works of Osmu Tezuka in the 1960s. Often referred to as the ‘Walt Disney of Japan’ and the ‘godfather of anime’, his best know works in the western world are Astro Boy and Kimba, the White Lion. However, anime’s routes actually date back to at least 1917 when the first commercially produced titles began to appear, a surviving example can be found in the form of Jun'ichi Kōuchi’s Dull Sword.

Why do anime characters have big cartoon-like eyes?

Unlike the western tendency to focus on human-like realism in animation, Japanese artists typically favour the overt portrayal of emotion and one way in which they achieve this is through the use of large unhuman, over-exaggerated, and colourful eyes. However, eyes are used to visualise or emphasise power and skill too, a great example of this can be seen in Naruto’s ninja eyes. Because the eyes are such a prominent part of an anime character’s appearance, it makes anime coloured contacts a must-have in anime-inspired cosplay.

Tokyo Ghoul – The newest addition to our range of anime contact lenses, our Tokyo Ghoul contacts have been designed to replicate the blood-red eyes of characters including Ken Kaneki from Sui Ishida’s Tokyo Ghoul. They feature a blood-red base colour with black detailing and a clear circular pupil to ensure normal vision.

Sage Mode – Often also referred to as goats eyes due to their close resemblance to real-life goat's eyes, our Sage Mode contact lenses feature a vibrant yellow block of colour with a rectangular black pupil. They’ve been designed to replicate the Sage Eye seen in Naruto characters including Hagoromo Otsutsuki, Naruto Uzumaki, and Kabuto Yakushi.

Son Goku – Our bestselling blackout black contact lenses are a popular choice for those looking to replicate the piercing all-black eyes of Son Goku, the chief protagonist from Akira Toriyama’s Dragon ball franchise.

Featuring vibrant hand-printed designs that replicate popular anime characters, our anime contact lenses are proudly manufactured in the UK. Formulated to provide maximum comfort and durability, they contain a mix of 62% polymacon and 38% water. Packaged in pairs they boast a lifespan of up to 12 calendar months from the date of first use.