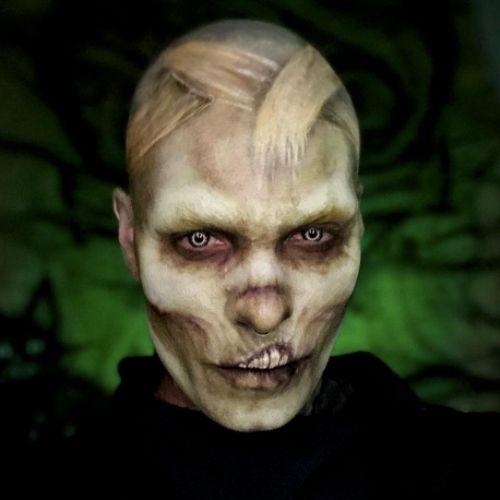 Looking to stand out among a disease-ridden crowd of reanimated corpses? Whether it be for an impending zombie apocalypse, World Zombie Day, or your Halloween 2022 costume, you will find an extensive range of white, grey, blind, red, and bloodshot non-prescription zombie contacts at Crazy Lenses.

Originating from Haitian folklore, zombies are believed to have made their first appearance in a feature film with the 1932 release of Victor Halperin's White Zombie. Later becoming an icon of American pop culture in the 1960s, Zombies have inspired a whole plethora of big-screen productions, video games, and comic books over the subsequent decades. This prevalence has made zombies a popular theme in cosplay and at Halloween, and subsequently, zombie contacts have become a bestselling theme among our extensive range of Halloween contacts.

Set in a post-apocalyptic America, the zombies from AMC’s Walking Dead saga are undoubtedly the most replicated characters in the world of zombie play. Generally referred to as “Roamers” and “Lurkers” in the comics by Robert Kirkman, and “Walkers” in the TV adaption, our No1 bestselling blind white contacts have been specially designed to replicate their blind and pupil-free eyes. This also makes them a good match for zombie costumes inspired by Redcon-1, World War Z, Zombieland, Patient Zero, and Resident Evil to name just a few.

Meanwhile, zombie color contacts like red UV can be used to recreate the red glowing zombie eyes from the Call of Duty Black Ops video game as well as post-apocalyptic science fiction horror 28 Weeks Later (2007). There are also designs like wild fire which is a near-pixel-perfect replication of the vibrant red and yellow eyes of the Alphas from NetFlix’s Army of the Dead (2021), or black mini scleras to replicate the blackened eyes of the zombies from Night of the Living Dead (1968).

Sold as non-prescription (Plano) lenses, our entire range of zombie contact lenses has been formulated to ensure unrivaled comfort and durability. Manufactured in the UK in compliance with the EU Cosmetics directive, they contain 62% Polymacon and 38% water. Furthermore, they are available in daily disposables as well as reusables with lifespans of up to 12-months for those who enjoy zombie play all year round.